I'm a novelist, poet, critic and sometimes writer for and about the theatre. Each of these things keeps interrupting the others. My poetry and criticism have won prizes. I'm the author of the popular and critically acclaimed fantasy quartet The Books of Pellinor, the Gothic fantasy Black Spring and The River and the Book, a forthcoming speculative fiction novel. In English, my novels are published with Walker Books (UK and Australia), Candlewick (US) and Penguin Books Australia. I have self-published two novels as Kindle ebooks: the literary memoir Navigatio and Jimmy Wonderspoon, a story that I wrote for my 10-year-old daughter. Presently I'm writing The Bone Queen, a prequel to the Books of Pellinor. You can find out more at alisoncroggon.com. And you can follow me on twitter at @alisoncroggon.

Why "Reimkennar"? It's an old word for sorceress that stems from old Germanic: literally "rhyme knower". Seems like a good title for a fantasy novelist slash poet slash whatever.

Facebook Author Page, and The River and the Book

Instead of apologising constantly for not keeping up with this blog, I'm posting news and updates at my new Facebook author page, which you can find here. (I'm much better with social media - you can follow me on twitter to at @alisoncroggon). And you'll also find some details about THE RIVER AND THE BOOK, my new book, out on October 1 in Australia and in November in the UK, with Walker Books. 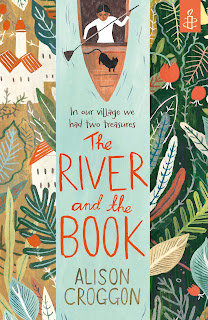 And early next year in the UK and Australia (2017 for the US) is the new instalment in the Books of Pellinor, THE BONE QUEEN, which is the story of Cadvan as a young man. So do go and like the page for updates!
Posted by Alison Croggon at 10:26 PM 1 comment:

So much for faithfully keeping up with myself! The truth is that blogging about myself comes a long way behind the other occasional writing - reviews, essays etc - that I do, and hence poor old Reimkenner is shamefully neglected. I am now logging all my online writing at alisoncroggon.tumblr.com in a desperate attempt to at least get everything in one place. But microblogging and twitter seems to be all I can manage.

But there is some news I should share: Black Spring has been shortlisted for the Ethel Turner Prize in the NSW Premiers Literary Awards. I am very pleased! And late last year I finished another Pellinor book, The Bone Queen, of which more hereafter. And after lengthy negotiations, The River and the Book, the novel I finished before The Bone Queen, will be out with Walker Books Australia and UK next year.
Posted by Alison Croggon at 12:59 PM 13 comments:

...The Guardian launched its new Australian edition on Monday, and asked me to go to the press call for the musical King Kong, which opens in Melbourne next month, for the first public unveiling of the giant puppet.

It was big. Full report here.

What I Did On My Week Off From Novel Writing